Returning to the Netherlands as a traveler after having been living there for more than ten years made me realize I had never properly explored Amsterdam as a traveler. I decided to use 72 Hours I Amsterdam City Card for one week stay in Amsterdam. Besides free entrance to famous museums and attractions in Amsterdam, the city card also includes free public transports. Thanks to this option, I did not have to stay in the center of Amsterdam and worry about the transportation cost. Just a tip: the hotels in the heart of Amsterdam and nearby to the tourist attractions are usually more expensive, and it does not mean they offer good service quality.

Following is my itinerary for 72 hours in Amsterdam. Since I started the card at 3 pm, I could use the card until 3 pm on the fourth day.

I started touring Amsterdam at a rather late afternoon. The Stedelijk Museum was my first choice. Its location is on the Museumplein, a complex in Amsterdam where the popular places such as Van Gogh Museum, Rijksmuseum and Het Concertgebouw are located. It is known, aside from its unique permanent collection, for its fascinating exhibitions on modern and contemporary arts from time to time. It is guaranteed the visitors will not be disappointed.

I was glad about visiting the museum. The museum had the Machine Spectacle exhibition by Swiss painter and “machine” sculptor, Jean Tinguely. I am not an art nerd who are familiar with famous artists, but I have read about Jean Tinguely’s intriguing and provocative works. It is not like every day I would get the opportunity to see his exhibition. Tinguely arts are mostly in kinetic art. Art that moves. It was so fascinating that initially, I had planned to spend 1.5 hours in the museum, but in the end, I spent 2.5 hours to explore all his kinetic art machines.

“Everything moves continuously. Immobility does not exist. Don’t be subject to the influence of out-of-date concepts. Forget hours, seconds and minutes. Accept instability. Live in Time. Be static – with movement.” [Tinguely]

It was dark when I finished my tour of the museum. Rijksmuseum and Van Gogh museum was almost close thus I spent the rest of the evening by walking around the neighborhood where the I Amsterdam sign also located.

I visited the Jewish Quarter. It took at least 4.5 hours in total. The complete story of my trip as you may read here: The Jewish Quarter in Amsterdam. After lunch, I continue walking to the National Maritime Museum from the Hollandse Schouwburg. It was less than 1-kilometer walking distance…

The museum’s name in Dutch is Het Scheepvaartmuseum. It is an extraordinary museum located in a beautiful building that used to be a naval storehouse built in 1600-ish. Some of the collections were exhibited digitally and interactive way.

One impressive collection of all is the atlases and maps of the world dated from 15th century. The Dutch cartographers were considered the finest in all of Europe back then. I was totally blown away to see the digital maps created by them and preserved after more than thousands of years!

Would you believe that in the course of the 17th century, Dutch wealth and maritime expansion is known for its strength across Europe? A famous Dutch admiral, Michiel de Ruyter, was known as the most skilled admiral in the Netherlands who frequently won fought against the English and French. There was even a special movie about his impressive leadership in leading the naval ships (totally recommended to watch, the movie was really well made!).

Additionally, the Dutch navy destroyed most of Spaniard’s ships during the famous battle in Europe: Battle of Gibraltar. The museum exhibited the painting of the battle together with a digital version of the painting where the visitor can just touch the screen of each section of the picture to find the historical event in the past. A fun way to learn the history of the Battle of Gibraltar. 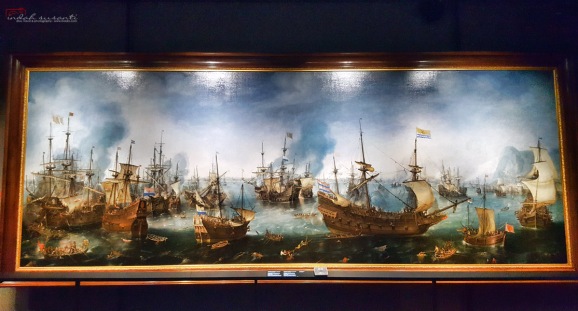 But nowadays, the Dutch is not a nation that starts nor creates wars. Well, I hope the recent conflict with Turkey will not escalate. Instead, the Dutch use modern technology to improve their ships and ports to be environment-friendly by shifting the maritime industry that promotes green technology.

The Hermitage Amsterdam is a branch museum of the Hermitage Museum of Saint Petersburg, Russia. It is housed in a beautiful building that was built in 1600-ish. The museum has regular exhibitions and permanent exhibition. When I was there, the museum had two exhibitions: Catherine the Great and Portrait Gallery of the Golden Age. Both exhibitions were outstanding especially if you have an interest in the world history. 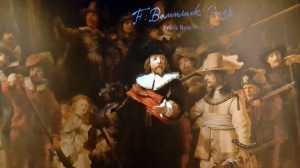 The Portrait Gallery of the Golden Age exhibition showed large 17th-century portraits that include the famous The Night Watch painting by Rembrandt. There were two floors of displays of paintings with the history of the Dutch culture from the golden age until the present day. The exhibition also showed the egalitarian Dutch but somehow there has never been a female Prime Minister ever get elected.

The museum is small, yet it holds interesting information about the canals of Amsterdam. Moreover, it was presented in an interactive way, more story about my experience in the Canal Museum, please visit Het Grachtenhuis (Museum of the Canals) – Amsterdam. A must visit if you are interested in the canals in Amsterdam.

I have read Anne Frank’s diary, Het Achterhuis, and her biography, Anne Frank: Her Life and Legacy. Her writing was so mature and wise, some stories were heartbreaking and moving. Her diary was exceptional especially for a girl at her age. Anne Frank, her family, and the van Pels family went into hiding in a secret annex of Anne’s father’s company building on July 6, 1942. Anne Frank started her diary shortly after the hiding.

Both buildings are still kept very well and the visitors could see the rooms in the secret annex where they hid from the Nazis for two years. Following postcard that I bought from the museum, showed how the buildings were connected and the rooms where they stayed. I will write a special post about Anne Frank House. 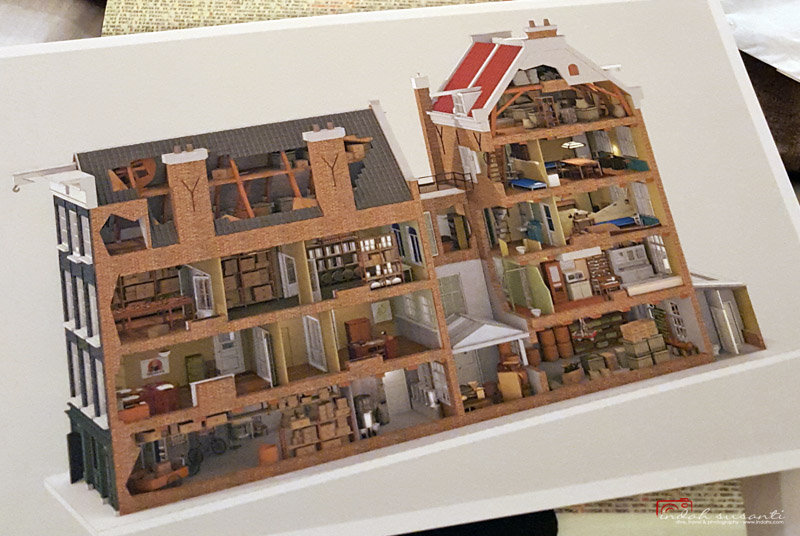 Anne Frank House was the busiest of all museums I had visited in Amsterdam. Unfortunately, I Amsterdam Card does not cover the museum. The queue line was long when I was there. Do prepare in advance if you plan to visit it by buying the ticket online.

Located in the heart of Amsterdam, the Nieuwe Kerk or New Church was built in the 14th century as the second Church to respond the growing number of population in Amsterdam. Nowadays fewer Dutch going to the Church thus the Church has to stop its church services and turn to be an exhibition place instead. The Church is a home to the tomb of a celebrated Dutch admiral, Michiel De Ruyter and the great organ from early 1600. Entrance to the Church was free with the I Amsterdam Card, but unfortunately, it did not include the exhibition in the Nieuwe Kerk. The exhibitions held in the Nieuwe Kerk are varied from time to time. During my visit, the exhibition was about the 90 years birthday of Marlyn Monroe.

The Oude Kerk or Old Church as in English used to be a Catholic Church that later became a Protestant Church after the Dutch revolt against Spain in the 15th century. In 1951, the church was about to collapsed thus it was closed for renovation. During my visit, there was an exhibition by Dutch artist, Marinus Boezem. On this exhibition, Boezem approaches the idea of the building as a vehicle or conveyor that lifts the individual from his earthly existence – sometimes literally, using the principle of the force of gravity (source). Visitors were invited to see the church from height via broken mirrors on the floor and a mobile lift. It was an interesting exhibition! 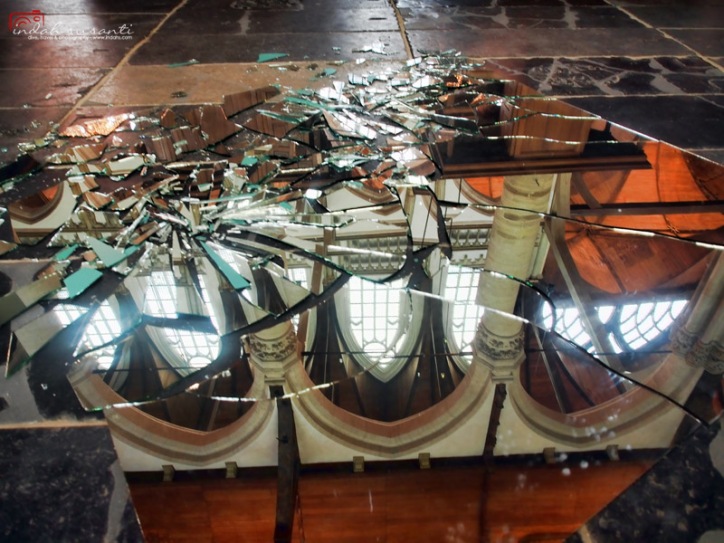 The location of the Oude Kerk is next to the famous Red Light District, prostitution area. The district is as old as the Church. In the past, married men and priests were forbidden to enter the Red Light District as it was aimed more for sailors who came from all over Europe. Currently, the area is a popular attraction in Amsterdam with majority visitors from all over the world. Red Light District is not only existed in Amsterdam but as well in other cities in the Netherlands except in Rotterdam. Prostitution is legalized in the Netherlands, and the workers do have rights and protected by the Dutch laws. In other cities, the visitors of the Red Light District are mainly the customers (or the police and healthcare/social workers), not tourists who want to see and perhaps buy their services or taking the selfie. The alleys where the sex workers’ cabins located have the stinky odor of body fluids and weeds. The Red Light District is not my favorite part of Amsterdam.

Rembrandt House was my last visit with I Amsterdam city card. The house is beautiful. Rembrandt experienced so many unfortunate events in his life that later Rembrandt had to leave the house because of bankruptcy. Rembrandt died as a poor man, and he was buried in an unnamed grave for the poor. The tomb was destroyed twenty years later after his death in 1669. 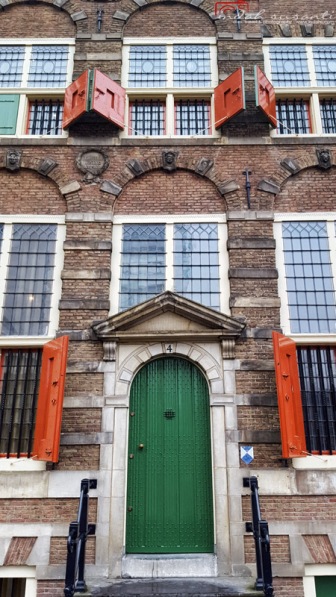 The museum also exhibits Rembrandt’s paintings and other painters’ collection that were influenced by him. His masterpiece, The Night Watch, is not available in the museum but you can see his other works including the four of Rembrandt’s Five Senses. Rembrandts painted the series of Five Senses and only four of the painting were found: Sight, Smell, Hearing, and Touch. The fifth painting of the Rembrandt’s Five Senses, Taste, is still missing and presumably destroyed.

~Additional Things To Do~