I accept two challenges to post five photos for five consecutive days this week. The first challenge on Black and White 5 Day Challenge was invited by Wilbur’s Travel, meanwhile the second challenge on Five photos – Five stories was invited by Oda Fagerland. I combine these two challenges by posting a black and white photo and its color version with its story for five consecutive days this week. 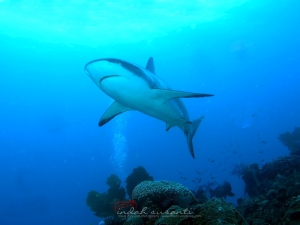 My first diving with tens of sharks was in Ambergris Caye (Belize). I just got my scuba diving license and to dive side by side with tens of Nurse Sharks on my first ten dives was truly amazing gift after “stressful” scuba diving course! Meeting the sharks has changed my traveling style from land only traveler to the combination of land and ocean.

I did my second sharks diving in Jardines de la Reina (Cuba) where this image captured. We stayed for a week in the middle of mangrove area, a home to the wild American saltwater crocodiles, surrounded by nature and away from humans crowds. We were diving every day with tens of sharks from various of species: Caribbean Reef Sharks, Lemon Sharks, Silky Sharks and Nurse Sharks. Before diving, we were advised not to provoke the sharks and to keep our hands close to our bodies otherwise the sharks could assume the hands as small fish to catch. Additionally, we had  to dive in a group and maintain our distance for not being too far.

There are so many different type of sharks species with different species behaviors. They were mostly larger than me, they showed curiosity to us by following us diving, sometimes next, below or above us. Just imagine one or two sharks of 2.5 meter swam next or face to face to you. It was amazing a feeling to have close natural encounter with the wild known as predators. Remembering those days made me missing the dives with the sharks. No one was injured nor attacked during our sharks diving in Belize and Cuba.

Having been diving with the sharks in natural way made me concern about the shark cage diving like the ones in Gaansbai (South Africa). Shark cage diving is unnatural and its sustainability is in question. The practice of shark cage diving is through luring these predator to the baits and in the end the sharks were accustomed to go after the cage for food. However, I do hope to visit South Africa for its sharks diving but without the cage! Hopefully the next one will be in Aliwal Shoal. Fingers crossed.

Since I accepted two challenges, I assume I am allowed to invite two bloggers to join the challenges. First of all, please don’t feel obliged to accept this invitation. I invite Mencari Jejak and Nin’s Travelog to participate. They are bloggers who love photography. Mencari Jejak just started photography with lots of potential. Meanwhile Nin’s Travelog has stunning photography, I am truly impressed by her recent photos series entitled Pride of Lions.