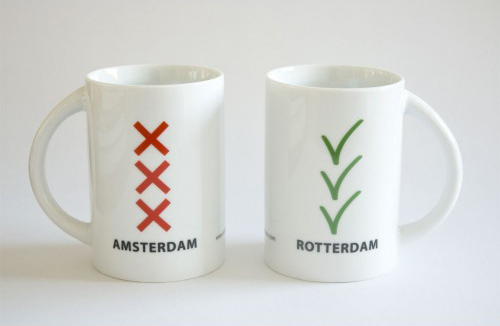 Inspired by the Amsterdam’s Flag

Similar to several cities around the world, a rivalry between two cities in the Netherlands does exist: Amsterdam versus Rotterdam. The competition has been ongoing since the 13th century when the both cities were granted their city status. Rivalry slogans are known, such as “I AMsterdam” versus “We’re Rotterdam” or “Amsterdam has it” then “Rotterdam doesn’t need it” and so on.

Rotterdam is often placed as the less favorable city compared to Amsterdam. The assumption that Rotterdam as a city with high crime rates, for instance, is often included as a rivalry topic to claim Amsterdam is safer than Rotterdam. But the fact is, Amsterdam is the most unsafe city in the Netherlands as according to 2014’s statistic.

There are at least five facts about the rivalry between Amsterdam and Rotterdam that I find interesting to know. This post is not an easy topic for me to write. Being a Rotterdammer,  I tried to be fair when writing this post. The result: I drafted this post for months, and yet, it still took me days to complete. My apology for a long article.

And, no, I am not one of them. I regularly visit Amsterdam as I have “Amrodammer” friends to visit. Amrodammer is a Rotterdammer, who moves to Amsterdam.

The football teams are the pride of the respective cities: Ajax from Amsterdam and Feyenoord from Rotterdam. The match of Ajax and Feyenoord is usually called as De Klassieker (The Classics), and it is a highly popular match in the Netherlands. The first “De Klassieker” match was in October 1921, and the result was a draw.

There is a stereotype that the fans of Feyenoord hate everything related to Ajax and vice versa. The stereotype was shown in a Dutch TV commercial of an ex-player of Feyenoord, John de Wolf, who was hospitalized in a hospital with a window view of Amsterdam Arena Stadium (home to Ajax Football Team). He closed down the curtain several times, ignoring the complaints from other patients. As fans to Feyenoord, why would John de Wolf wanted to see a stadium belongs to Ajax! The commercial went on; that would not happen if he picked up the appropriate health insurance 🙂

While Ajax has more winnings than Feyenoord, I find Feyenoord is a better club than Ajax when about to value and respect its fans and athletes. Feyenoord supporters are known as Het Legion (in English: The Legion). In recognizing its supporters, Feyenoord Football Squad number 12 is never given to any player but specially reserved for The Legion.

And as it goes for the athletes, a Greek’s goalkeeper, Kostas Lamprou’s statement does the justice:

3. City of Canals versus Manhattan on the Maas

Most Dutch cities are built on canals: Amsterdam, Delft, the Hague, Nijmegen, Utrecht, and even Rotterdam. The canals in Amsterdam is special as the city has one hundred kilometers of canals, 90 islands and 1,500 bridges connecting the islands. The Canals Ring (Grachtengordel) in Amsterdam was built in 17th centuries and considered as UNESCO Heritage Site for its historical value. You should not miss the canals tour when visiting Amsterdam. 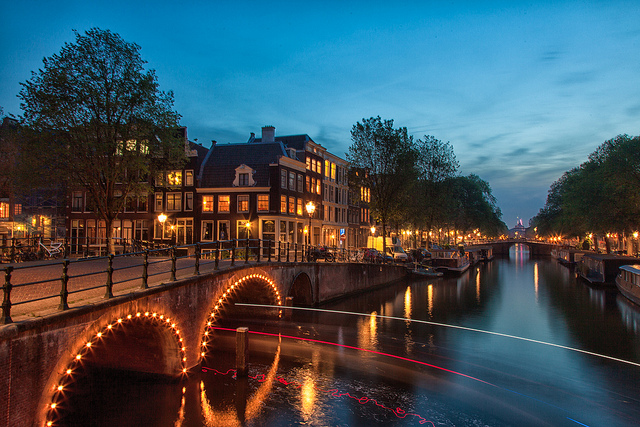 Rotterdam also has canals. The ones in Delfshaven area has history back to the 14th centuries, and the canals are connected to another city, Delft. But being a town of historical canals is not something Rotterdam famous for. Since Rotterdam was bombed heavily in the World War II, many historic buildings were destroyed, that leaves Rotterdam an opportunity to have different city plans (and looks) than the rest of the towns in the Netherlands. Rotterdam keeps developing with modern architectures. Its train station, Rotterdam Centraal, is one of the fascinating modern architectures. Its roof uses 10,000 square meters of solar panels to promote renewal energy. The city offers a view of modern high-rise buildings on each side of the Maas River that earns the city a special name as Manhattan on the Maas.

Rotterdam: Manhattan on the Maas (Image by Indah Susanti)

Tourists in Amsterdam, containers in Rotterdam
-(Maurice Jansen in an article Ports of Partnerships)

Rotterdam had never been considered to be a touristic city like Amsterdam until the city was recommended by the New York Times and Rough Guide as Top Ten Cities to visit in 2014. Rotterdam has held prestigious international events such as Marathon Rotterdam, North Sea Jazz Festival, International Film Festival Rotterdam and plus famous national event, Summer Carnival Street Parade, but tourism is relatively new if compared to Amsterdam.

I have doubts that Rotterdam will beat the Amsterdam’s tourism, but I do find the Rotterdam’s today provides better comforts for tourists than Amsterdam such as better (read: safe) bicycle lanes, modern train station, and well-managed city transports. But most of the time, it is not the services what tourists are looking for.

5. The world’s most sustainable cities

Both cities are among the top ten best sustainable cities according to ARCADIS Sustainable Cities Index in 2015: the fourth place is Amsterdam, and the fifth is Rotterdam. I am not surprised if both cities were competing from the start to achieve the status. Thankfully both cities made it as top five.

Amsterdam scores better as a profitable city while Rotterdam has the first rank for having the best city relationship with its people by providing sound policies on the city services such as drinking water, renewal energy, and healthy city environment for its residents. It includes affordable housing (60 percent less expensive than the rest top 10 cities). It is one of the reasons I love living in Rotterdam; the city takes good care of its residents. 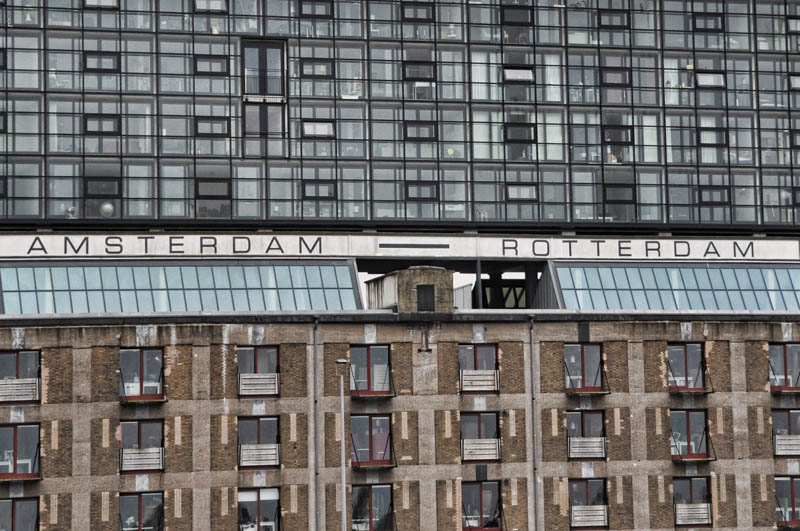 Amsterdam or Rotterdam: each city has its unique characteristics (Image by Indah Susanti, taken in Amsterdam)

Interesting movies about Amsterdam and Rotterdam:

The Marathon (De Marathon) – This is one of the heartwarming Dutch movies I have ever watched. It showed the Rotterdammers’ multi-ethnic/nationals relationships when they prepared the Marathon running event to save their business. Some Rotterdam’s jokes included.