Moalboal: the Sardine Run after the Storm

Moalboal (the Philippines) is located around 100km from Cebu city. We spent almost 24 hours flight trip from Amsterdam to Cebu (that included 8 hours stop over in Changi Airport). As Dutchie and I arrived at Mactan-Cebu International Airport, we still had to continue our trip to Sumisid Lodge dive resort in Moalboal. Luckily we asked the dive resort to pick us up. We arrived at around 22:00–ish. Google Maps mentioned it would take around 2 hours driving. In reality, it took us more than 3 hours. There was no traffic jams but we passed hilly roads with hairpin bends that slowing down the drive.

Sumisid Lodge was located right in front of Panagsama beach with a dive center next to the resort. Our room was small but clean. The dining area was located on the terrace with the view to the beach and ocean. The staff were super friendly and they were immediately serving us delicious sandwich as late dinner. All went just well.

As a traveler with ultimate aim to scuba dive, my first question after the dinner was the scuba diving time schedule on the following day. The staff resort looked shocked when I asked. She said, “Aren’t you tired after the long trip? No rest tomorrow? No long sleep?” I guess majority travelers might have shared similar travel enthusiasm. Regardless tiring long flights plus hours of driving journey, we felt even more energized to explore our destination as we arrived.

Sardine run. I am not too happy with the image result. Please click for larger version.

Our main goal in Moalboal was to see its famous sardine run, it was popular among scuba divers.

Sardine run is a group of million sardines that keep staying together as their defence mechanism. They move and swim together as a group. This behavior is, perhaps, being interpreted as “run” as mostly they move together in order to secure themselves from possible predators. If you were lucky, you will see them moving as a huge ball like showing on this picture – Sardine Run in Moalboal. Unlike the sardine run in Southern Africa that usually occurred in May to July; the sardine run in the Philippines is available to see for all year long.

I was inspired by Henry Jager’s amazing photography of Sardine Run in Pescador Island to visit Moalboal. Dutchie said yes when I proposed Moalboal as our diving holiday destination, he was that easy :D. Pescador Island was only 15 minutes boat trip from Panagsama Beach. The island was uninhabited and the faster access to the island was from Moalboal.

Of course my first request to the dive center on our first diving day was to dive in Pescador Island for the sardine run. Rudy, the operational manager of the dive center was grinning at me, he told me that the sardines have moved to the house reef of Sumisid Lodge and we did not even have to dive to see them, “Just snorkel from the beach. It’s better to see those sardines when snorkeling than diving.” I was shocked. I guess I missed the most updated review about the sardine run in the Philippines.

Anyway, despite of the unexpected news, we were still diving in Pescador Island during our stay in Moalboal. The diving story will come later as future post. We were scuba diving in the house reef of Sumisid Lodge as well. The sardine group was swimming on the surface at five meter depth. It was difficult to see them as we were at 20-25 meters depth. They were covering the sea surface that made the dive site darker than normal dive during the day. No sardine images captured during the diving but I managed to take few shots of other marine species in the house reef dive site. 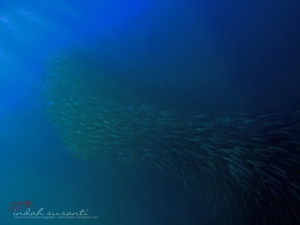 Sardine run. I am not too happy with the image result. Please click for larger version.

Snorkeling was definitely better option to see the sardines. Due to tropical storms attacked before and during our visit, the seawater surrounding Moalboal was murky from the sands. We were snorkeling in the house reef of Sumisid Lodge after the storm and the seawater was still not clear enough. I was not too happy with the images that I took, nature circumstances did influence specific underwater subjects. However, it was still fun to see those sardines were ‘running’ around, they were totally awesome to see. Their movements just like a dance to me. Maybe it should be called as Sardine Dance than Sardine Run. Oh well, that’s just my two cents.

The following is our GoPro video of sardine run and the surrounding area where we were snorkeling. The seawater was unfortunately not clear enough after the storm attacked on previous day, but you can still see the Sardine Dance. Hope you enjoy it!