How to Spend Eight Hours in Changi Airport

On December 2014, Dutchie and I arrived in Changi Airport (Singapore) at three a.m. and we had to wait for our next flight to Cebu (the Philippines) at 11 a.m. We had similar long transit in January 2014 but it was an afternoon transit so we left the airport and had early dinner at Marina Bay Sands. Our second transit in Singapore last year was rather impossible to leave the airport as the malls nor tourists attractions in Singapore did not open for 24 hours. We concluded to spend eight hours transit in the airport.

Changi Airport has three terminals which connected by tram/metro that leaves every five minutes. Each terminal has special entertainment areas for transit travelers. We decided to explore Terminal Two and Three. We did not visit the Terminal One. The terminal has a Balinese style swimming pool, but it opens at 07.00 a.m. to 11:59 p.m.

I wrote the highlight of our transit activities as following – please note that the timeline was sort of rough estimation.

03:00 to 03:30
Wandering around at Terminal Three. Got special code from Information Desk to use wifi for free. There were Airport Guide Books available in several languages including Indonesian language – I think it was an Indonesian version, although after reading it thoroughly, there were some words that actually belong to Malay and not used in Indonesian language. Anyway, the guide book was very helpful. Take one when you have long transit or delay!

Ah yeah, Christmas week. There were many Christmas decorations on the airport, including a German Mickey theme. 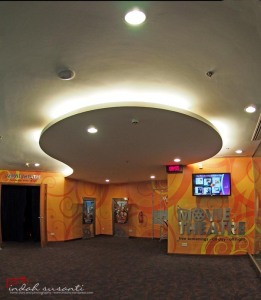 03:30 to 06:45
We went to the Cinema. Funny to say this when we were actually inside an airport. Dutchie had good sleep on the airplane (as usual) so he took a full advantage of the cinema by watching one and half movies. He even brought food from the food court to eat during the movie.

I slept during the movie of Captain America Two. I was not the only one who sleeping; most transit travelers in the Cinema were sleeping.

Suggestion: use ear-plug if you plan to sleep in the Cinema as the movie sound was too loud.

07:00 to 07:45
Sat at a café. Drinking a cup of Chai tea – which was a totally wrong choice as the tea was not real Chai tea and it was too sweet. I did not even ask for additional sugar. At least I could read news and wrote on my notebook.

08:20 to 08:50
We moved to Terminal Two where we spent walking around at shopping area and the Enchanted Garden. The garden was an interactive garden of flowers and decorated glasses with small pond. I read the garden was supposed to have special sounds and lights plays but we did not experience such shows.

09:45 to 10:15
We were wandering around the upper floor. We saw the second cinema, it was a smaller cinema but with even louder sound. Additionally there were a room with treadmill (great for transit travelers who still have energy to burnt), a gaming area and computer room to access internet. There was a transit hotel as well – six hours for around 40 Euros.

We went to Sunflower Garden at the same floor. It was an open air garden where you can see the activities at the runaways. Some part of the garden was a smoking area. 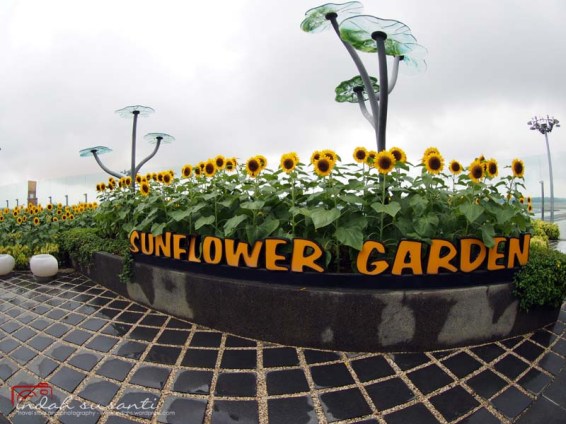 10:20 to 10:40
We returned to the ground floor. Spending our time reading what Peranakan means and how South East Asians use the Chinese jars in the past. The jars and its designs reminds me of my grandfather’s tableware. I think my mother’s great-great grandparents could be categorized as peranakan, the ones who migrated to Indonesia.

PS: when all these activities failed to entertain your transit in Changi Airport, you can always try the following chair…