Eighth edition of Marine Life monthly post. Marine Life post is published every 19th of the month. It aims to share information on specific marine life species and to promote their conservation. All images are taken by Indah Susanti unless stated otherwise.

Even an eel Murray feels safe inside hard corals

Coral reefs are often called as the rainforest of the sea. It is estimated that one-quarter of the ocean population depends on the coral reefs for shelter and food. Without coral reefs, they will be homeless and have no place to reproduce. Oceans consist of only about 0,1% of coral reefs. Millions of people in the world directly or indirectly depend on the coral reefs for food, income, and medicines.

“The Economics of Ecosystems and Biodiversity (TEEB) study found that coral reefs generate up to US$1, 25 million per hectare from tourism, coastal protection, bioprospecting and fisheries annually.” Source: UNEP, Coral Reefs – Valuable but Vulnerable.

The contribution to people’s lives is amazing. Regrettably, people are the ones who threaten the coral reefs. These threats vary from over-fishing, invasion of species caused by humans’ intervention such as the lionfish issue in the Caribbean waters, irresponsible marine tourism/fishing, and water pollution. As a result, coral reefs are in danger and reduce in size and quality year by year.

I am not a marine biologist thus my knowledge is based on information from articles that I have read. Corals are actually invertebrate animals. They have skeleton, stomach, mouth, and tentacles. The tentacles are used to capture plankton for food. A single coral is called a polyp. It lives in a group of hundreds or thousands polyps and is connected with living tissue to form a community. This community is usually seen like one coral by us but actually consist of many coral polyps. 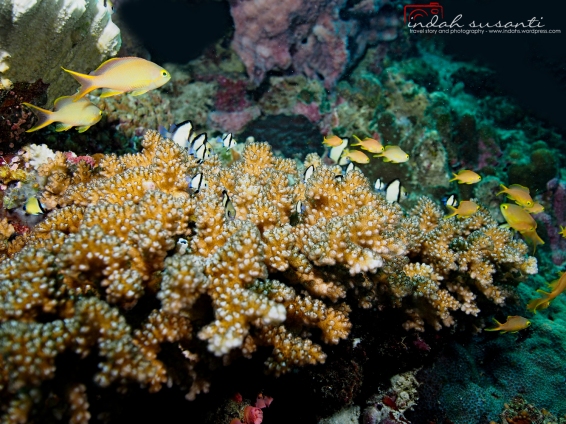 Corals are perfect place for juveniles to hide 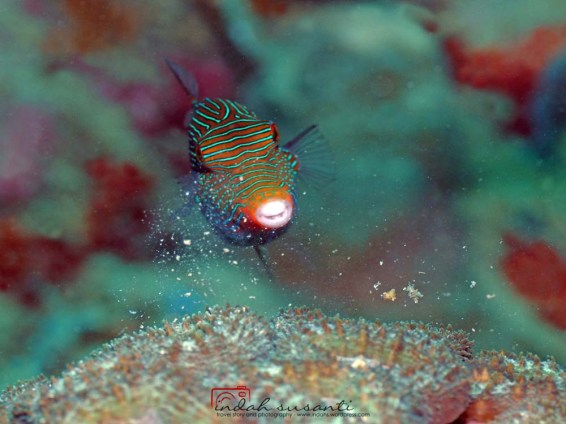 Corals as food resource for fish

Coral Day and A Dream for A Small Island 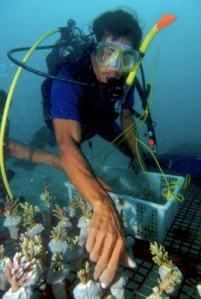 Since the year 2009, a group of Indonesians who are concerned for the existence of coral reefs started a Coral Day with the aim to maintain and restore damaged corals. The 8th of May is selected as Coral Day because the Indonesian fishermen’s fishing period starts early May. The event promotes the coral restoration by planting the dominant reef-building coral species on the seabed and holds several educative activities locally to raise the awareness to the importance of the corals.

The coral day will take place on Bangka Island this year. Readers who have been following my blog during last year perhaps remember the story and the struggle of its islanders. The island is located in the North Sulawesi Province of Indonesia and currently, the island is mined for its iron ores despite the protests by its islanders and environmentalists. The sea surrounding the island is now polluted due to sedimentation soil from the mining blasting. The blue seawater has turned to murky brown color and the soil covers the seabed. There is no doubt that marine life will die as a result.

Ulva Takke, a founder of NGO Suara Pulau in Bangka Island wrote me a sorrowful letter. Rainy days have always made her cry, as she keeps picturing the more corals covered by mud and soil sediment from the mining. She had a regular educative program to introduce the importance of corals, mangrove, and sea-grass to the school students. The program is discontinued as the area where they used to visit is polluted and is covered by mud and soils.

Joko Widodo with Slank Rock Band. Kaka is the one with the white shirt. Image by Cikarang Slank Fans Club.

The struggle, Save Bangka Island, has been going on for four years now. The mining continues despite the changing new president, Joko Widodo. Save Bangka Island’s patron, Kaka Slank, a musician who is publicly known as a supporter of Joko Widodo had met him several times. Ironically, the meetings do not help a small island in need.

However, Ulva Takke and the rest of the islanders are still not giving up their dream to have healthy coral reefs on their island.

The Coral Day will be held on Bangka Island and it will also include three other nearby islands. The four islands are known locally as Kita Bangga (We are Proud in English) Islands. The event will take place on Saturday 9th of May 2015. The organizers and volunteers will install new corals at several strategic areas that are far from possible water pollution from the mining.

Scuba divers who wish to participate in the coral installation are also welcome. There will be a briefing before the installation of the corals and it is great opportunity to learn how to “plant” and care for the corals on the seabed. If you are interested, please contact e-mail: info@suarapulau.org for reservation and advice on accommodation during your stay.

The event also invites people to adopt corals and donate to support the event activities:

Organizing a Coral Day in a half-mined island and damaged seawater sounds like a tragic joke, but should a dream for healthy coral reefs vanished after greediness, ignorance, and neglectfulness?