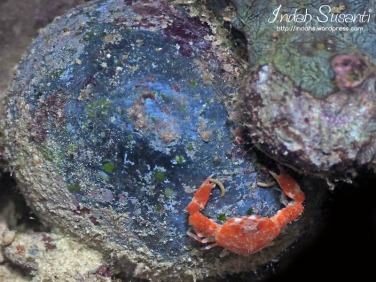 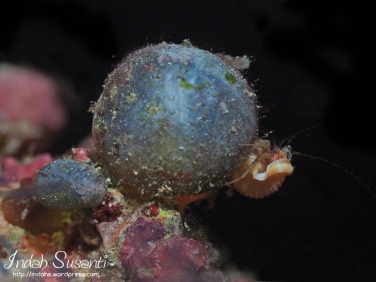 Not many scuba divers love night diving, at least that’s how I found after four years diving and met other fellow scuba divers from around the globe. Dutchie and a German lady whom we met during our diving trip in Raja Ampat (West Papua, Indonesia) were the exception.  Dutchie is a fanatic to night dive, that especially after spotting the corals’ blooming in Curacao during a night dive. I am not into night diving as much as Dutchie. I was frequently bitten by a large number of  “looked alike blood worms” that attracted to my camera lights. They could be very annoying! Plus I get cold easily after the dive at night. However, I admitted that diving at night could be fun. And Raja Ampat has spectacular dive sites for night diving. There were many weird species to see during the night dives that usually unseen during daylight.  In fact, if you wish to see the Raja Ampat’s famous walking shark, you should dive at night.

Wobbegong is a common sight during the night dive, while during the day they usually stayed inside of a cave, at night time; they were outside their caves, lying lazily on the ocean floor. Wobbegong is also called as carpet shark. So far the scientists have found only 12 species of carpet sharks and they are located in the western Pacific Ocean and the eastern Indian Ocean. The name was derived from Australian Aboriginal language that means “shaggy beard” – and the sharks do have a shaggy beard and they look cool with this appearance. I love them, they do not eat nor attack a human. I was diving so close to them many times and they were just lying cozily. I believe marine species will not disturb human unless being provoked.

Sadly in Australia, these rare species are still consumed regularly as fish and chips menu.  Some species of wobbegong are now included as ‘near threatened’ species category according to IUCN Red List. Luckily in Raja Ampat, these sharks get fully protected. Raja Ampat is a Marine Protected Area accordance to Indonesian law where destructive practices such as reef bombing, aquarium fish trade, and commercial fishing are banned. Raja Ampat has Shark Sanctuary area that covers 46,000 square kilometers. I hope all scuba-diving operators in Raja Ampat would respect the Indonesian government and the locals efforts in protecting the area. Sincerely I was not happy with the dive operator that we used in Raja Ampat, they ignored several issues that could endanger the existence of marine conservation in the area. My review of this boat is available on Scuba Board Forum – this link.

On our last day having a night dive, we saw a walking shark, Epaulette shark. He walked with his fin. I missed the opportunity to take picture of him as a whole because he was hiding inside a small tunnel. So the pictures I took look like these: 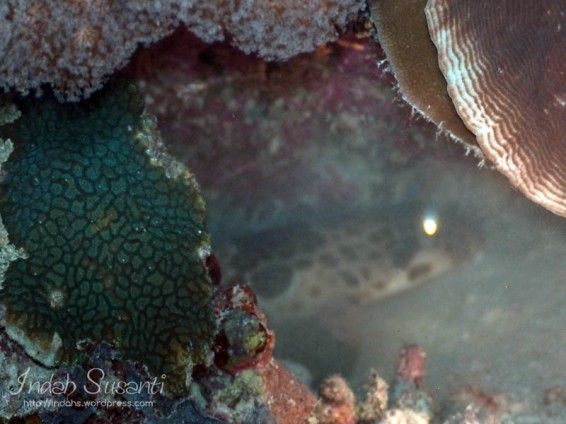 Thankfully Dutchie managed to get a GoPro video footage of him walking. From this video, you can see how the shark was walking with his fin. I edited and added some other footage that Dutchie managed to capture during our night dives. But please be warned: it is not a professional video 🙂

If you are going to Raja Ampat for scuba diving, night dive is certainly a must to do!