On the 14th May 1940, Rotterdam was bombed heavily by the German air force. Leaving thousands homeless and lost their love ones, it ruined historical buildings, it was devastating how a city could be destroyed heavily. The bombing followed by the Dutch capitulation to Germany on the following day, 15th May 1940. Two years after the Netherlands’ surrender, Indonesia, which was colonized by the Netherlands, fell to German’s ally, Japan. Five years later, 1945, the World War Two ended: the Netherlands was freed from Germany occupation and Indonesia declared its independence. However the wars did not end for Indonesia and the Netherlands. In the period of 1945 to 1949, Indonesian army had to fight the Dutch army, for the Dutch longing to reoccupied Indonesia. 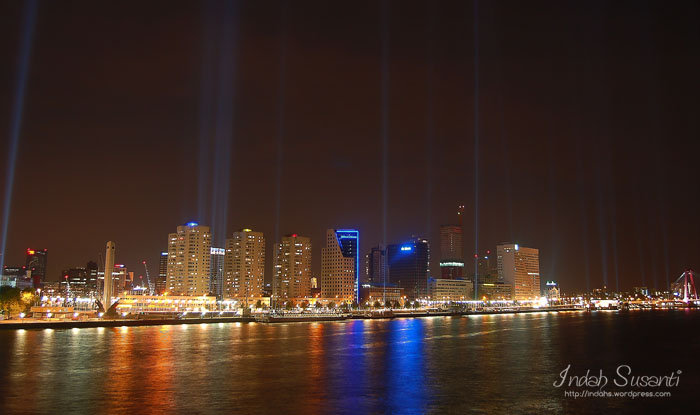 No wars have real winners, no citizens would enjoy living when their freedom and their identity being scrapped. The truth is people suffered most during the wars. It is a tragedy to be avoided. To remember the bombing tragedy, a couple years ago, Rotterdam held light shows at night time to present the bombing area (Rotterdam Blitz) in 1940. The show was very touching and beautiful at the same time. A date to be remembered for not happening again.