This Sunday morning, the temperature in Minneapolis (Minnesota, USA) is -2°F (-19° C) and tonight, the Sunday’s Super Bowl LII (52) (a final football match of New England Patriots vs Philadelphia Eagles) will be held in the U.S. Bank Stadium of Minneapolis. Perhaps we will experience the coldest temperature record in the Super Bowl tonight! Freezy…freezy… Thankfully, the U.S. Bank Stadium has a roof that will keep everyone warm from typical February’s cold winter in Minnesota (it is a climate control stadium). The stadium is also the first football stadium in the U.S. to use lightweight ETFE film roof, a transparent roof, permitting outdoor light without weather restrictions (source). 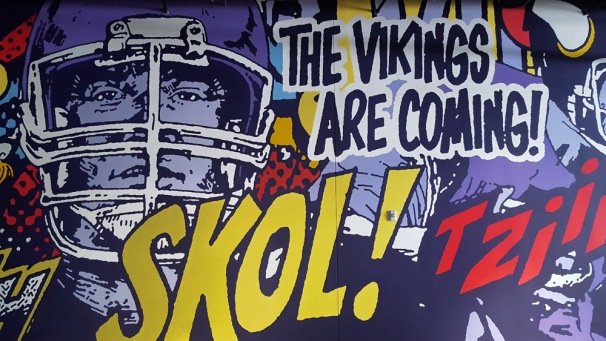 Dutchie and I had a tour of the stadium last year and we were impressed. The stadium is a home stadium for Minnesota’s football team, the Minnesota Vikings. Unfortunately, the Vikings lost in the semi-finals to the Eagles football team from Philadelphia. I have no clue about the American football but since Minneapolis is the host of the Super Bowl LII this year, I feel the urge to support the Minnesota Vikings. It would be fun to experience the Vikings played in the Super Bowl, in their home stadium. I could imagine the purple craze in Minneapolis if the Vikings made it to the Super Bowl. Mind you, purple is the Viking’s team color, a beloved team of majority Minnesotans, and look at their stadium – everything is so purple! 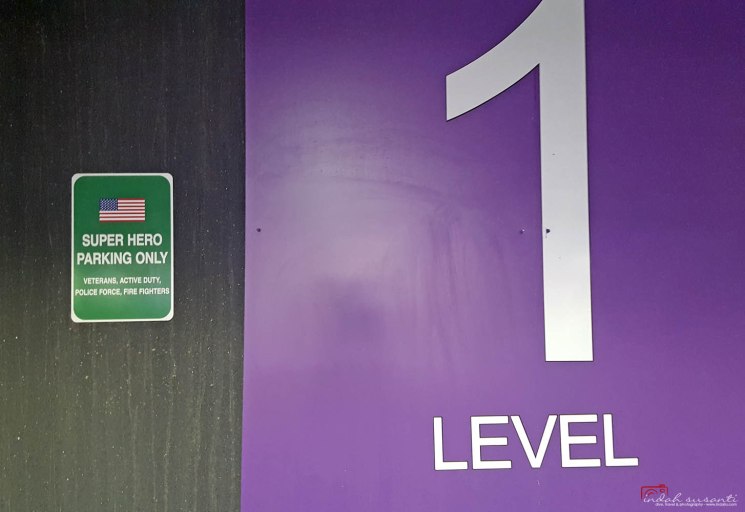 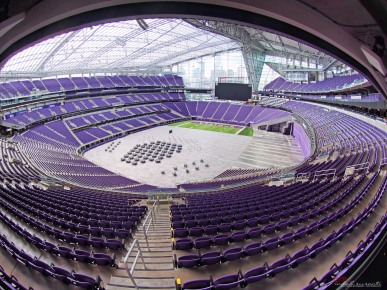 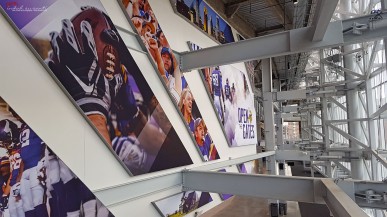 The gate is incredible huge – The U.S. Bank Stadium

The stadium has a capacity of 66,000 to 70,000 seats with numerous clubs and lounges. The tour included the visit to the NFL lounge and numerous companies-sponsored clubs such as Medtronic, Delta Airways, and some more companies. They had modern design rooms, luxurious, and elegant rooms. One of the VIP bars, for instance, not only it has an amazing view of the field but it also has a huge terrace with a view of the city. I was surprised by the number of companies sponsoring a sports stadium. Obviously, the American football is very popular, but the stadium is not just for the football, it also hosts other events such as music concerts and even a wedding party! Yep, the stadium is a popular venue for a couple to get married and to celebrate their special day especially if they are Vikings fans. 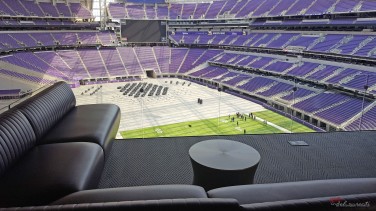 View of the Terrace at Club Purple

One thing that I find truly special in the stadium is the Gjallarhorn, as according to the Norse’ mythology, the horn is related to the gods, to announce their arrival. The Gjallarhorn here is sounding to mark the Vikings are coming to the field. Only the chosen Honorary Vikings members to sound the Gjallarhorn (source). It’s a unique tradition for the team and it does not look easy to do it. The horn is massive! Too bad we will not hear the sound of the Gjallarhorn at the 2018 Super Bowl LII. 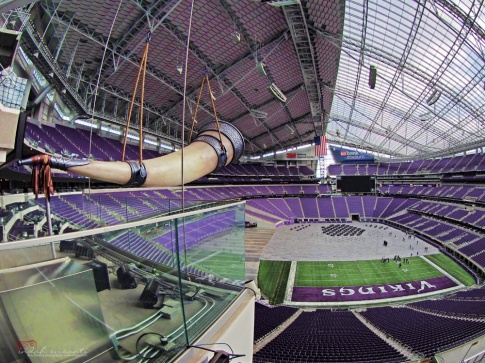 During the tour, we also visited the players’ locker room and it was smaller than I thought but certainly, it was luxurious. The tour did not include a visit to the players’ shower room though 😀 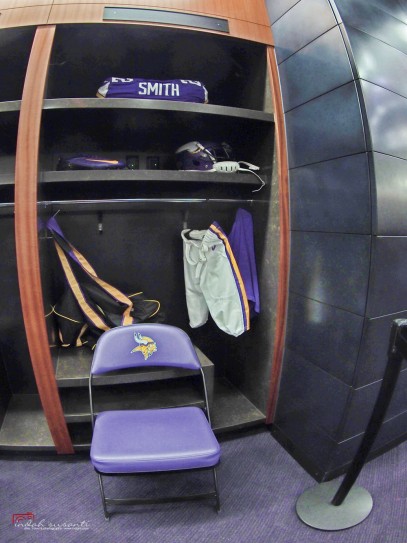 Craig Melvin, a television news anchor of NBC admitted that the U.S. Bank stadium is the nicest football stadium that he has ever visited (I was watching the NBC news when he made the statement). I haven’t seen any other football stadium in the U.S., but now I know that I have seen one of the bests already. Bravo, Minneapolis & Minnesota! As for tonight, I am not sure which team to support, the Patriots or the Eagles, but I will watch the Super Bowl on television just for the fun of it. May the best team win!