Ninth edition of Marine Life monthly post. Marine Life post is published every 19th of the month. It aims to share information on specific marine life species and to promote their conservation. All images are taken by Indah Susanti unless stated otherwise.

Nudi is a nickname of Nudibranch, and I love this species, mainly because of its beautiful striking colors. Some nudibranch have more than two bright colors on their bodies. The body shape of nudibranch looks like snail but without its shell that makes its appearance like a small colorful candy.

Nudibranch is a common marine life species in warm seawater of Indo-Pacific region but it is also existed in subtropical and cold seawater. It is easily spotted from the depth of five meter to deeper ocean. The size is varied from less than one centimeter to large one. It has dorsal appendages with function as respiratory and digestive systems.

The dorsal appendages sometimes called as cerata but some nudibranch anatomy diagram mentioned it as gills. Its horns called as rhinophores and actually sort of the “nose” of nudibranch, with function as sensory receptor to “chemical scent” and water current. The shapes of cerata and rhinophores of nudibranch are varied. 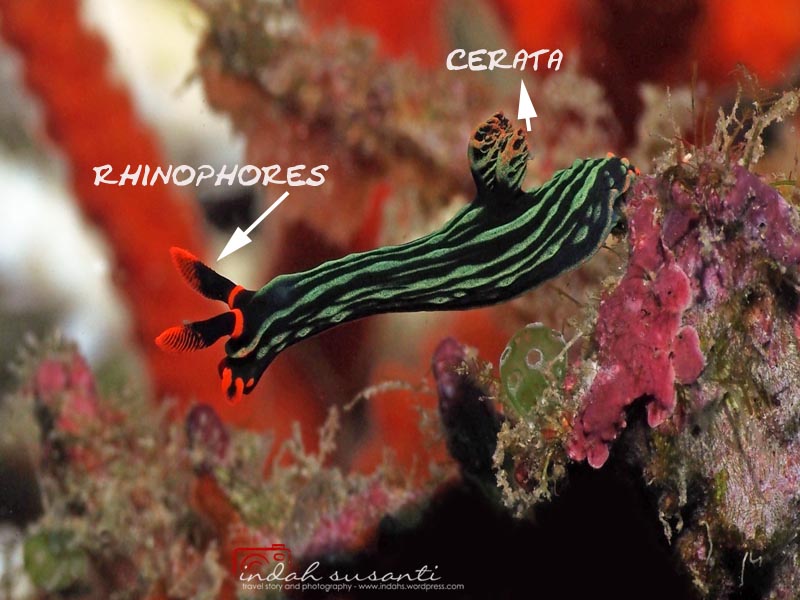 There are more than 100 genus (taxonomic rank) of nudibranch. Each genus of nudibranch has numerous of species. On this series, I would like to introduce nudibranch genus called Nembrotha. There are 13 species identified as part of Nembrotha genus. The common things of the 13 species are: poisonous; hermaphrodites and they feed on ascidians (sea squirts). I am not sure how Nudibranch species being classified as specific genus, I assumed because of the similarity of cerata and rhinophores and I noticed that the species under Nembrotha genus have similar shapes of cerata and rhinophores.

Their species names and descriptions are as following – (not as in the order of the images):

Nembrotha Chamberlaini, this species is found in the Philippines and Indonesia. I took its image in Komodo (Indonesia). It has white colored body with dark brown large spot, and reddish brown on its cerata and rhinophores. The mouth and “tail” of this species are blue.

Nembrotha Lineolata, this species is distributed in tropical Indo-Pacific and western Indian Ocean. The image was taken in Raja Ampat (Indonesia).  Its body has white with unique brown patterns. Meanwhile its cerata and rhinophores have yellow, purple-blue and red colors. Its mouth and foot are blue.

Nembrotha Cristata, this species is distributed in  tropical Indo-Pacific. I saw this nudibranch in Indonesia and the Philippines. It has black colored body with bright green dots (pustules) and green border on its foot. Some articles mentioned it feeds on green ascidian.

Nembrotha Kubaryana is also called as Nembrotha Nigerrima. Similar to Nembrotha Cristata, it is distributed in Indo-Pacific and it has black and green color on its body. However, the differences are its foot and mouth area that have orange color. Its rhinophores has orange ring color. It feeds only on blue ascidian.

Nembrotha Milleri, the name of this species as according to wikipedia is derived from a nudibranch enthusiast, Michael D. Miller. The nudibranch lives in warm waters of Indo-Pacific. It has black-greenish color, with black colored cerata and rhinophores.

Nembrotha Yonowae is distributed in tropical Indo-Pacific. Its looks just like Nembrotha Cristata only with orange dots and dark brown skin. Its cerata and rhinophores are grey with partially black.

Now, let’s test your new marine biology knowledge! What you have to do is answering the species name of image A to image F.  For your kind effort, I will give an underwater image printed mouse pad (26,5 x 19 cm) for the first correct answer as in this blog post commentary box (not in the image’s commentary box). The underwater image printed on the mouse pad is taken by me and the winner can choose the image.

Additionally, the commentators with correct answers will be honorably mentioned with their blogs/website and their newest post.

Rules of the Quiz

1. Please write down your answers in the commentary box with the following format (just copy paste this to ease you):

2. The last comment for the answers is Sunday, 26 April 2015  midnight of the Netherlands time.

3. The answers, the winner and the honorably mentioned bloggers/readers will be announced on Wednesday 29 April 2015 in this blog.