We left our hotel in New Delhi very early in the morning to catch train to Agra. It was 4 am in the morning. As we arrived in New Delhi train station, I was shocked to see many people slept on the parking area of the train station. It saddened me everytime remembering the scene. I hope by now they are treated better and get sheltered as Indian economy has improving progressively since my last visit.

We took Bhopal Shatabdi Express train to Agra, bought the tickets in the train station. The trip took us two and half hours and we went directly to our hotel that we booked when we were in New Delhi. Our hotel in Agra was bigger than the one we had in New Delhi but nothing special, Yamuna View Hotel. The entrance was better than the guest room. On our first day arrival in Agra, we spent half day sleeping. Totally exhausted from the trip already.

In afternoon, we went to Agra Fort by auto rickshaw. The driver was very young and honest. He told us the fort was very close and we paid 40 rupee to get there. Indeed, it took us less than 15 minutes to get there.

Agra Fort was impressive. It is listed as UNESCO heritage site and considered as a walled palatial city that located on the bank of Yamuna River, and two and half kilometers from the Taj Mahal . It was built by Akbar the Great in 1565, using red sandstone. It took eight years to complete with nearly one and half million workers. The fort was served as military defence and also the royal family residence. Later on the fort became a house prison of Shah Jahan, the grandson of Akbar the Great and the fifth Mughal Emperor. Shah Jahan ruling was taken over by his son, Aurangzeb who declared his father was incompetent to rule and put him under arrest. It was rumoured that Shah Jahan died in Musamman Burj, a beautiful marble tower with the view of Taj Mahal, a world wonder that he built in the memory of his third wife, Mumtaz Mahal.

After passing through the entrance gate, we walked through the ramp where I had a chance to took a photo of an elderly Indian man with his cane. Actually he was our tour guide. A very friendly man. 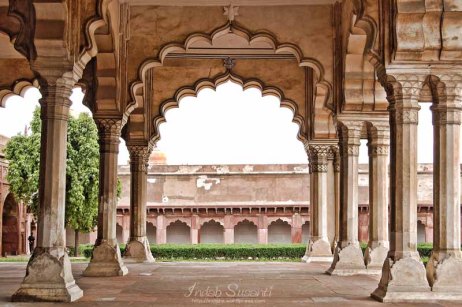 The Royal Pavilions of the fort is a complex with beautiful mosques, Mina masjid and Nagina Masjid that attached to Zenana Meena Bazaar (ladies’ market); and palaces: Macchi Mahal, Khas Mahal, Shish Mahal. The balcony of the pavilions has beautiful view of Yamuna river and the Taj Mahal. Mussaman Burj, where Shah Janan spent most of his detainment days by his own son, also located in the area. It is an octagonal tower made from marble with mixture of Hindu & Islamic carving designs. The tower is facing to Taj Mahal, where Shah Janan’s favorite wife was buried.

Visiting a place like Agra Fort always made me wonder what it was like in the past: what kind of leaders were they, were they happy with such lavish life, how did they treat their people, why people adore them, and so on. Looking at the magnitude architecture of the fort, its design, beautiful carving with delicate marbles, with millions workers built their home; the Mughal must had it all.

Photos on India to print: India by indahs 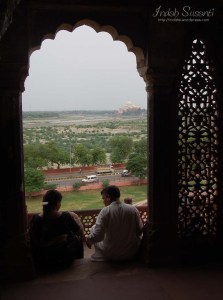