Islands to Dive in Costa Rica

I have been wanting to visit Costa Rica after reading the news of their (former) President, Laura Chinchilla, closed down shark-finning operation on the Costa Rican Pacific Coast. She was awarded as the Shark Guardian of the Year after her seriousness in protecting the ocean in Costa Rica. While it changes now after the new president, Costa Rica reminds my interest to visit. There are four islands that I have learned from other scuba divers that worth to dive. I went to one of them and enjoyed the scuba diving in Caño Island. I hope someday to return to Costa Rica and dive the rest of the islands.

These small group of islands is accessible from Costa Rica’s mainland, from Playas del Coco. It is famous for the sightseeing of bull sharks. Bull Sharks are aggressive sharks similar to the Great White Sharks and Tiger Sharks. It is not my dream to meet them without preparation. The Bull Sharks are usually huge (up to 230 kilograms) with length until 4 meters.

The season to dive into Bat Island is from May to September.

Protected as a marine reserve, the Island, and its water surrounding is pristine. It is about 45 minutes by boat from Marino Balleno National Park (Uvita). Caño Island offers various rock formations, and canyons are populated with various species of fish such as snappers, barracudas, and parrotfish. 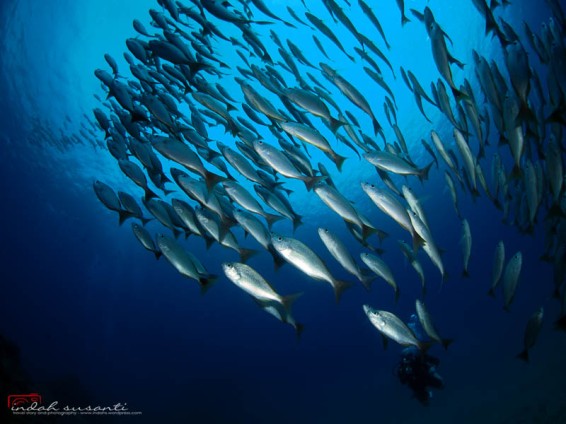 We were scuba diving around this island from Uvita, during the crossing, we saw dolphins swam along our boat. The diving was good, clear visibility, numerous fish. We saw endless schooling of fish and also reef sharks. We were not lucky to see the schooling Mobula rays swimming around the island like the following video taken in Caño Island by our dive center in February. We were there in March and no Mobula. Sometimes it was all about luck, but the essential thing was that we still had excellent diving!

Located near to the Pacific coast of Guanacaste on the mainland, Catalina Islands are known for a diving destination to see unique marine species. Consisted of 20 uninhabited islands, the waters surrounding are migration path of the Giant Manta Rays. It is common to see the manta ray in the Islands. Aside to that, the Islands are famous for species called as Bullseye Electric Ray.

The Islands are accessible from the beaches of the northern part of Guanacaste such as Flamingo, Papagayo, Playa del Coco, and Tamarindo. The diving season is all year around.

Cocos Island is an uninhabited island located about 550 km (342 miles) off the Pacific coast of Costa Rica, a UNESCO World Heritage site because of its marine diversity. There is no flight to Cocos Island, so scuba divers had to fly to San Jose first then take the boat to Cocos Island, which that will take around 35 to 40 hours. Jacques Cousteau, a legendary undersea explorer, called the island “the most beautiful island in the world.” The Island is mountainous with a beautiful waterfall at its Bay.

What makes it even more spectacular is the regular schooling of hundreds Hammerhead sharks that passing on its water. I hope to have a chance to capture the images of the schooling Hammerhead Sharks in the future. Besides of Hammerhead Sharks, other unique marine species such as silky sharks, marbled rays, manta rays or Rosy-lipped batfish can be seen on Cocos Island.

Information for Indonesian travelers who wish to visit Costa Rica as tourists:

Special thanks to Kathryn and Joe Foyle, British (hardcore) scuba divers, who are kindly allowing me to use their underwater images taken in Cocos Island special for this blog post. Kathryn and Joe have been traveling around the world for scuba diving. Please visit their YouTube channel for underwater movie of their travels: JJ Foyle @ YouTube