Five Facts about Indonesia to Know

There are many facts written about Indonesia but mostly related to “Bali” versus “the rest of Indonesia”. Despite common facts that have written around the internet, there are some facts that perhaps not commonly known and just recently become news. I included five facts following their explanations, I hope I will not bore you!

1. Indonesia is not a country based on specific religious law

Having 250 million population and 86% of them are Muslim, that makes Indonesia as the largest Muslim country in the world. But it doesn’t make Indonesia as an Islamic state because Indonesian constitutional law is not based on the Islamic Sharia Law.

Indonesia has one province out of 34 provinces that allowed to enforce Islamic Sharia Law: Aceh Province. It was allowed following the Helsinki (peace) Agreement to end the separatist movement by the Acehnese.

The long history of struggle against the Japanese and the Dutch army have taught Indonesian founding fathers to build the archipelago nation by acknowledging the diversity of Indonesians; their beliefs, and ethnic’s traditions. National language was introduced to help the communication among the ethnic groups in which has its own languages and dialects. Indonesia has approximately 300 ethnic groups with its own traditions, cultures, and cuisines.

Majority Indonesians whom I know of are fond of the multicultural and multi-religions as Indonesia’s unique identity. Unity in Diversity is Indonesia’s National Motto. Following is an image that was taken in 1980-ish during children traditional fashion show. I was one of the participants if you wonder which one I was: I wore the Timorese traditional clothing.

2. Majority Indonesians do not have surname, most of them have only one name

It started by the Javanese ethnic group, that makes up to 95 million people, the largest ethnic group in Indonesia. Many Javanese have only one name or two names without a surname.  When an Indonesian with one name joins a social media, then he has to improvise, just like my former colleague does:

Meanwhile, Javanese or Indonesians having famous parents or family tend to use their father or family name to maintain the fame and social status. An example is Megawati, who is a daughter of Indonesian founding father, “Sukarno”; her last name is Sukarnoputri (in English means a daughter of Sukarno). Another famous family in Indonesia is “Bakrie”, it is the last name of a conglomerate, Ahmad Bakrie. The name is existed until today at the third generation as his sons and grandchildren maintain his business kingdom. Maybe it will last until the fourth generation and so on.

3. The internet is slow, but Indonesians make up as one of the biggest populations to use social media

If you google “Indonesia internet speed”, this is what you get:

Average connection speeds in Indonesia at 2.4 megabits per second are among the lowest in Southeast Asia, according to a recent “State of the Internet” report from cloud services provider Akamai. Mobile connection speeds in the fourth quarter of the year were even lower, at 2.0Mbps. (Aug 13, 2014 – source: Indonesia’s Youth Frustrated by Slow Internet Connections)

The internet in Indonesia is depressingly slow that I just gave up with it when visiting my parents in Jakarta or traveling to Indonesian remote islands. Mr. Badfish, who is now in Bali, sharing this frustrating situation.

Surprisingly, despite slow internet speed, Indonesians still manage to put themselves as one of the biggest population to use social media. Imagine if the internet speed is improving and available in all islands!

I find it is weird that the Official Notice did not mention other International Airports in North Sulawesi and Makassar, that host direct flights from Malaysia, Philippines and Singapore. But I assume visa-free entry still applied when you are going to land in North Sulawesi or Makassar without stopping in Bali nor Jakarta.

5. The most beautiful nature in Indonesia is its ocean

Dutchie and I have been diving in several countries, and every time we dive, we keep discussing to return to Indonesia for scuba diving. Two places in Indonesia have blown our mind: Komodo and Raja Ampat. Indonesia has impressive volcanic mountains, unique cultures, delicious food from all over the islands, majestic rainforests with amazing habitats from tiger to the orangutan, but its ocean is the one that I endorse most. Padi shares my opinion and mentioned as follows:

Indonesia is an epicenter of biodiversity, hosting a greater variety of marine life than anywhere else on earth…….While place names such as Bali, Komodo, Java and Sumatra bring jungles and tigers and land-based adventure to mind, the underwater world here is simply in a class of its own.

How do you proof this? Do visit Indonesia and swim-snorkel-scuba its ocean! 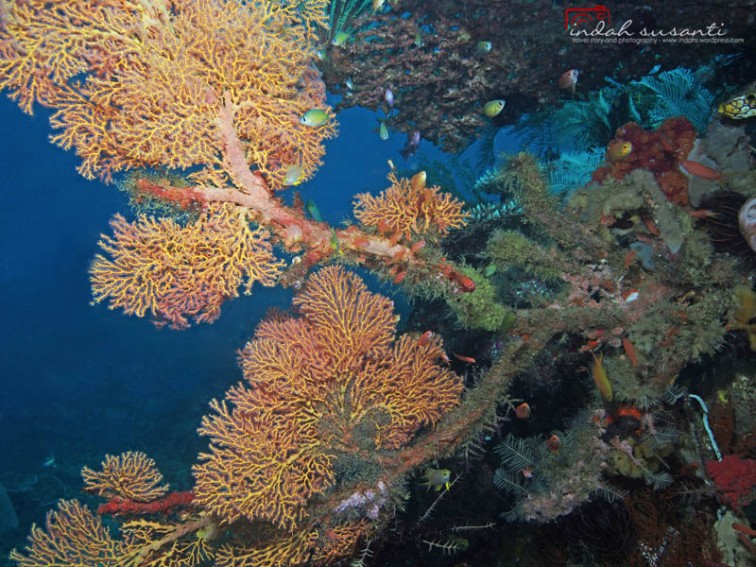