Don’t Mess with this Peacock!

Monthly Marine Life is back! I decided to publish this monthly article every 19th of the month and this post is the third edition 🙂  This time I am sharing a little bit information on Peacock Mantis Shrimp (Odontodactylus scyllarus). A beautiful marine crustacean that you don’t want to mess around with! 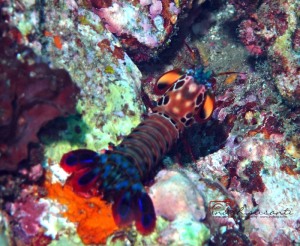 First, peacock mantis shrimp is very pretty to see in its habitat: the ocean. It looks like an alien, isn’t it? I have seen it during my dive in Indonesia and the Philippines. It has striking colors on its shell that make it as the most outstanding mantis shrimps. There are more than 400 species of mantis shrimps, and the peacock is just one of them. When a mantis shrimp died and cooked, the color of its shell is changed, similar to lobsters and other marine crustaceans. In Japan, mantis shrimp sushi called as shako sushi. 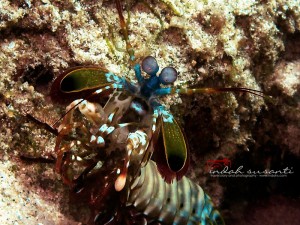 Third, despite its tiny size (max is 18 centimeters), mantis shrimp has the fastest punch and it is very strong! It has two raptorial appendages on the front of its body that could break glasses like showing in this video. There was a story that the peacock mantis kept in aquarium attacked its human to bleed when trying to clean the aquarium. The shrimp is very protective of its territorial. I was careful when taking its picture during my dive – I did not want to annoy the shrimp to break my camera lens!

A smart comic about the mantis shrimp created by the Oatmeal can be read here – Why the Mantis Shrimp is My New Favorite Animal.

Photos were taken in Lembeh Strait and Bangka Island (Indonesia).