While Amsterdam is the capital city of the Netherlands, the Hague (in Dutch: Den Haag) is the city where Dutch government, Dutch Parliament, the Supreme Court, Office of the Royal family, Embassies and international organizations located. The Hague is the political heart of the Netherlands with het Binnenhof as its icon. Het Binnenhof is a square surrounded by historical buildings that is now used for governmental matters. It is located in the center of the Hague, next to Hofvijfer  (a small pond).

Until year 1992, the Dutch Parliament used the building called Old Hall (in Dutch: Oude Hall) as their meeting chamber. Since it was considered too small to facilitate the growing number of the parliamentary members (150 representatives), a new meeting chamber is built on the south part of the Old Hall.

Another important building in the area is Knight’s Hall (in Dutch: Ridderzaal).  Every third Tuesday of September, the Dutch Queen/King has to hold an annual speech in the Knight’s Hall. It is located in the center of the square. At the first sight, I thought it was a church  This annual event is popularly called as Prinsjesdag. During this annual event, the Queen/King will be transport from Noordeinde Palace to het Binnenhof by a golden carriage (in Dutch: Gouden Koets).

Unfortunately I have never been able to take picture of this golden carriage (blame it on my office schedule), so this time I share the photo of this carriage taken by R J Essink, Ministerie van Defensie as published in wikimedia. It is owned by the Royal family, quite remarkable carriage I must say. 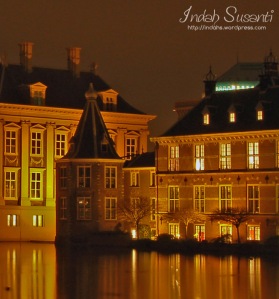 Dutch government led by a Prime Minister whose office also located in het Binnenhof. His office is called as Little Tower (in Dutch: het Torentje), located in the small tower in the northern corner with the view of Hofvijver. As you can see in this picture, the Little Tower looked dark already, I guess the Dutch Prime Minister brought his work home at the night I took this picture  🙂

The square is free for visitors to enter and you can hire a tour guide if you wish to know the history of the square. Across to the square is shopping center with nice restaurants and cafe where you can rest after exploring the square. Sometimes there are Dutch TV news media around the complex. And who knows you will meet Dutch Prime Minister during your visit 😉